Part time Incumbent for Rainow with Saltersford and Forest

The village of Rainow is at the centre of this large rural parish in The Peak District National Park. Although a rural parish the town of Macclesfield is only three miles away where there are good train links to Manchester (25 mins) and London (1 hour 40 mins).

Most of the population live in or near the village centre but a significant number in the more isolated hamlets and outlying farms scattered along the roads and lanes and up into the hills. Some families have lived here for generations, particularly in the farming community, but the parish also includes many newer residents drawn by the countryside, with all that offers, the active community and good commuter links. Residents tend to stay so the population, in recent years, is gradually getting older. In recent times services have diversified to include some different elements of worship e.g. the new audio-visual system whilst also retaining some traditional services. Although the regular worshipping congregation may be relatively small, the ties between the community and the Church are threaded through life in the parish. The significant civic and festival services are well attended, and individual families celebrate major life events in church. However, active mission needs to be encouraged and developed, particularly among families and young people. There are opportunities for fellowship through Home Group and Prayer Group, as well as Mothers’ Union and the Coffee Mornings.

For more information about this application process, please use this link

The Diocese of Chester is in the province of York in the Church of England, part of the global Anglican Communion. For more information about our life, ministry and work please visit our website www.chester.anglican.org We are linked with the Anglican Church of Melanesia in the Solomon Islands and the Dioceses of Aru and Boga in the Democratic Republic of Congo.

The Diocese covers an area of 1025 square miles, approximately the old Victorian County of Chester, including parts which subsequently became absorbed into Merseyside and Greater Manchester. The Rivers Mersey and Tame approximately delineate the boundary with Liverpool and Manchester. There are areas of dense urban population, mainly in the north, stretching from Birkenhead to East Manchester. There are prosperous suburban regions of West and South Wirral, Chester and south of Manchester, with a mainly rural heartland, bounded by the Derbyshire Pennines and the Welsh Border. The overall population is around 1.6 million.

The Diocesan Bishop is Mark Tanner and the Bishop of Birkenhead is Keith Sinclair, the position of Bishop of Stockport is currently vacant.

The Cathedral for the Diocese is in Chester.

The Diocese is divided into two archdeaconries: Chester covering the western half and Macclesfield the eastern, each with nine deaneries. There are 273 parishes, about 100 of which can be described as rural. Compared with many dioceses, there are few teams, and few multi-parish benefices. There are approximately 231 stipendiary clergy. The ministry of Readers and Pastoral Workers is important, with over 400 licensed. The role of self-supporting ministers is increasing, with over 80 in post at present. 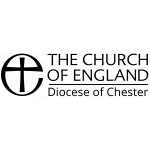